The European Forum for Urban Security (Efus) is the largest network of European cities for matters concerning urban security and prevention, with some 250 members striving to improve urban security and crime prevention in Europe through innovative thinking, information sharing, research, and networking.

The German-European Forum for Urban Security (DEFUS) represents the German members of Efus: 16 cities and two organizations work together closely to address the security-related challenges of urban governance. We update our members on current developments in the field of urban security, collect and synthesize information for topical briefs, invite members to join the European research projects we participate in, and organize a productive exchange among the members through frequent workshops and conferences. Beyond that, we are firmly committed to European integration and cooperation and therefore support and maintain the contact between our members and other national networks of Efus.

DEFUS and Efus consider prevention the key element in the development of secure, just, open, and accessible public urban spaces. Therefore, our work centers on balancing aspects of prevention and social cohesion with interventions, sanctions, and repression. This approach rests on a broad definition of urban security, because our first priority as a network is meeting the needs and demands of our members, and over a decade of doing so has resulted in an array of topics that cannot be contained in the narrow definition of “hard” security. Therefore, our work encompasses four different dimensions of urban security:

In case of any questions or comments, please do not hesitate to reach out:

News from DEFUS and Network life:

The German-European Forum for Urban Security (DEFUS) represents the German members of Efus: 16 cities and two organizations work together closely to address the security-related challenges of urban governance. The City of Lippe has left the network in 2021.

Although the second pandemic year has continued to complicate communications, we have facilitated and created ways for our members engage one another in comfortable, accessible, and, above all, secure formats. In two digital assemblies and six internal DEFUS-workshops, members kept themselves and each other up to date on current topics, challenges, and solutions:

Training for Urban Security organized and hosted by DEFUS

DEFUS as an associated partner and advisor

Over the past years, DEFUS has increasingly taken on a role as mediator and network hub between municipal practitioners and researchers, receiving and forwarding needs, demands, and results from and to both sides. A growing number of requests to join consortia as an associated partner reflect this development. In 2021, DEFUS actively participated in

and has been requested to join three more projects that are currently pending approval. Finally, DEFUS serves on the advisory board to the German “Competence cluster Islamic Extremism (KN:IX)”.

DEFUS collects, curates and presents information on relevant topics for its members in an ever-increasing number of dossiers. The ten password-protected dossiers are continuously updated and expanded upon.

Together with its members, DEFUS has produced position papers outlining guiding principles for issues in the wider field of urban security. These include

as well as a joint

with the German Prevention Congress (DPT). The memorandum makes four specific demands of the newly formed German coalition government, aiming for acknowledging and further strengthening the key role of municipalities and local measures in the production of security.

News from DEFUS and Network life (in chronological order):

Our network is growing

Efus and DEFUS are very happy to welcome four new members from Germany. The cities of Nuremberg, Hannover, Gladbeck and Berlin joined our network in 2019. With 535.000 inhabitants Nuremberg and Hannover count to the bigger cities in Germany. Gladbeck has around 76.000 inhabitants and belongs to the Ruhr region. The German capital Berlin is very interested in exchanging experiences with other European metropolis.

In January, the DEFUS office moved within Hannover. We now share a wonderful office with the German Crime Prevention Congress (DPT). The new office offers plenty of space to host meetings and events. The close cooperation with the DPT is fruitful and a benefit for the German Forum.

The 1st annual member’s assembly of the German Forum took place affiliated to the General Assembly of Efus in Augsburg on June 24th. Besides the welcoming of the new members, the meeting focused on polarisation, mechanisms for participation and the protection of public space. Following up the last member's assembly, a working group on local risk management was set up to deepen and consolidate the professional exchange around this pressing issue.

The German Forum held its 2nd annual General Assembly on Thursday 12 December in Cologne. The discussions of the 40 participants focused on the topics of safety audits and strategic planning, securitisation of public space and safety in nightlife settings and included a visit to Cologne's centre for crime prevention and security. The assembly was followed, on Friday 13 November, by a workshop on identification and assessment of urban security risks.

The German Efus members have developed guiding considerations on the peaceful co-existence in our cities in August. Almost all DEFUS members have adopted the document which already has been and will further be disseminated in Germany. Dirk Wurm and Christian Kromberg presented the considerations in events on the national level and will continue to do so in 2020.

Events organised and hosted by DEFUS

DEFUS together with the German Police Academy (DHPol) hosted a symposium on safety and security of public spaces. The event brought together around 100 participants from the police and staff of cities and municipalities. In the two days event, the participants discussed the stakes, responsibility and role of police and city administration to guarantee the safety of public spaces. In four workshops the topics of social cohesion and social capital, the protection of mass events, the distribution of tasks and cooperation at the local level between police and municipality and the use of new technologies for safety and security were addressed. The discussions, presentations and results of the events are going to be published in a book in 2020.

Symposium "The Organisation of Peaceful Coexistence in the Tension Field of Migration, Integration and Security"

On 20 and 21 November 2019, DEFUS and the German Police University (DHPol) organised a symposium titled "The Organisation of Peaceful Coexistence in the Tension Field of Migration, Integration and Security" in Münster.  The event was aimed at mayors, researchers, municipal employees, as well as representatives of the police and civil society and united 70 participants. This was the 2nd event in cooperation with the German Police Academy in 2019. The results of both events will be published in a book next year.

In cooperation with the German Institute for Urbanism, the German Forum organised a two-day training on safety and security for events in Berlin in October. After having received more applications than spaces for participants, DEFUS and DIfU will repeat the training in March 2020.

The cities of Munich and Düsseldorf, as well as DEFUS, are part of a research project on the security in station quarters – the so-called SIBA-project. The project started in August 2017 and will run until August 2020. While the cities offer their station quarters as a research area, DEFUS is in charge of organising and offering training for local authorities in which the results of the project will be poured into local prevention concepts.
In February, the project group met for two days in Düsseldorf and explored the urban development of the station quarter.

Online Platform to connect Prevention and Integration measures – pufii.de the German Crime Prevention Congress, the Crime Prevention Council of Lower Saxony and DEFUS have set up an online platform aiming to connect the professionals for prevention and integration in Germany. The online platform publishes a weekly newsletter and offers a rich databank with information regarding integration, migration and refugees in Germany. This year DEFUS has overtaken the lead in the project and receives third-party funds to develop a new pillar for the online platform. PUFII.DE has received funding from the German state and has organised beyond other things two webinars on diversity in cities in fall 2019. 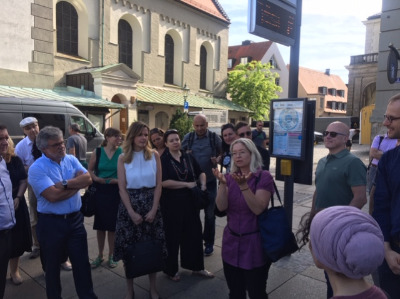 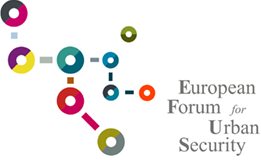